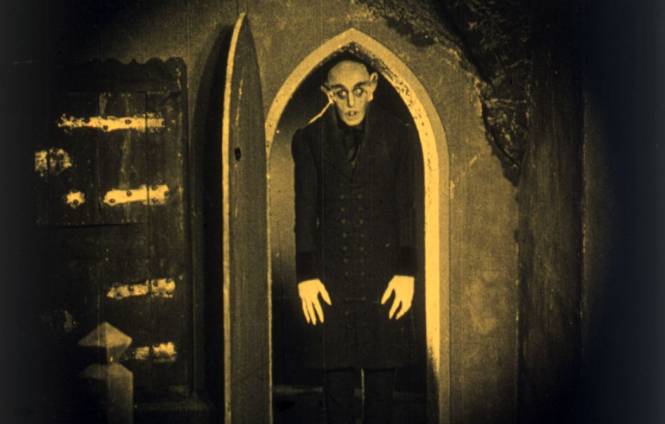 
The Jane Pickens Theater and the most important horror film ever made share a centennial birthday this year so we... invite you inside to help us mark this historic occasion.

Celebrate the 100th anniversary of F.W. Murnau’s Nosferatu, the horror classic frequently hailed as one of the most enduring and influential films of its genre. Featuring a sinisterly good live score by Jeff Rapsis on synth-piano to enhance the eerie ambiance. Our records show Nosferatu was first screened in this building 100 years ago and now you, gentle patrons, will experience the terror like patrons-past.

An unauthorized adaptation of Bram Stoker’s Dracula, Stoker's heirs filed suit after release and a court ordered all prints of Nosferatu destroyed... but like the vampiric Count, several prints remained to thrill audiences in posterity. Nosferatu remains an unsettling and chilling experience steeped in the haunting style of German Expressionism, featuring Max Schreck’s iconic performance as the vampire. Though it has inspired remakes (most notably Werner Herzog’s 1979 version, and Francis Ford Coppola's 1992 love letter to Murnau's version) and countless homages in popular culture, none can compare to the sheer power and terror of Murnau's vision.

This HD restoration—mastered from the Friedrich-Wilhelm-Murnau-Stiftung's acclaimed 35mm print—offers unprecedented clarity and fidelity to the original release.