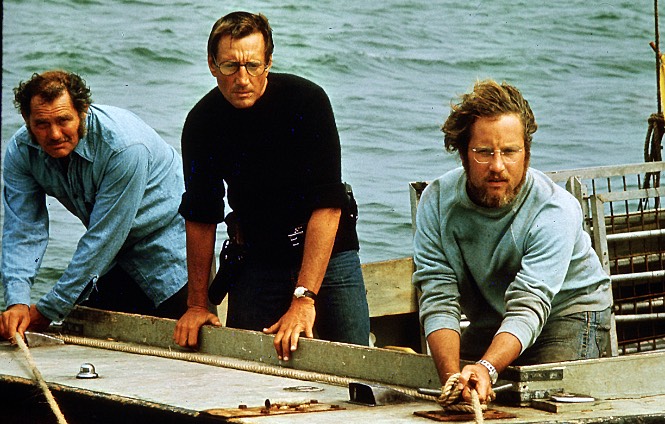 What's Up Newp, Narragansett Beer and The JPT invite you to join us

Jaws Summer Party is a Celebration with two nights of Jaws screenings & activities both nights.

Tuesday July 21st
~ Live Music by The Teledynes at 6:30 pm
~ Film at 7:30 pm
~ Narragansett Beer+ What's Up Newp will be hosting an after party immediately after the screening of Jaws at Brick Alley Pub! We'l be buying the first 50 folks thru the door a Gansett and we'll have swag, games, and more! Event begins at 10 pm.
Wednesday July 22nd
~ Live Music by The Z-Boys at 6:30 pm
~ Film at 7:30 pm
Both Nights:
~ Narragansett Beer will be joining us both nights. Stop by their table and win some swag, or buy some exclusive Jaws + Gansett Swag.

~ Enjoy the "Crush It Like Quinn" Narragansett Beer Experience on both nights.
This event has completely sold-out over the last couple of years. Get your tickets now to make sure you are not left out of the fun!

A giant great white shark arrives on the shores of a New England beach resort and wreaks havoc with bloody attacks on swimmers, until a local sheriff teams up with a marine biologist and an old seafarer to hunt the monster down.

The TeleDynes - three talented musicians bring to the stage a power and force expressed by their name. Will, Eric and Vinny deliver performances that always leave the audience wanting more. A dynamic trio of Electric Guitar, Upright Slap Bass and Drums. Focusing on Surf Rock and Rockabilly, drawing heavily from blues, country and swing to create their sound. While playing many classic covers from the 50’s and 60’s, The TeleDynes also play their own material. A fusion of multiple roots styles creating their own brand of rock n’ roll.